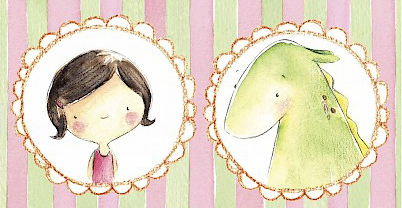 It’s been quite a month for Serena Geddes. The children’s book illustrator behind Random House’s Lulu Bell series written by Belinda Murrell has just picked up her first author-illustrator picture book deal – a two-book deal at that, with Simon & Schuster in the US. She’s also made the longlist for the 2016 Children’s Book Council of Australia’s Book of the Year Awards for Run, Pip, Run with author J.C Jones, and launched the timely new title, Hijabi Girl, about a feisty, AFL-playing eight-year-old and her friends co-authored by Hazel Edwards and Ozge Alkan.

Not bad for a modest gal once so unsure of her talents she spent more than a decade working in design, advertising and publishing companies without once putting up her hand for an illustration gig. “It’s amazing what doors open sometimes when you just throw yourself out there or are open to different things,” she says.

Serena grew up in Melbourne drawing constantly and copying characters like Garfield from her brother’s comic collection. At high school in Sydney her love of art, photography and textiles bloomed, but she left school with no idea what to do next. She studied visual arts at uni before switching to a wonderfully hands-on graphic design course at Billy Blue with a strong focus on traditional illustration techniques.

She worked as a receptionist in a graphic design company before beating 800 applicants to a Walt Disney animation studio job as an ‘inbetweener’, drawing the 12 out of 24 frames-per-second the human eye needs to understand motion but can’t quite perceive. She stayed six years and acquired all manner of skills, but her self-confidence took longer to develop.

Eight years in design companies and four at publisher Random House showed Serena exactly what designers and editors look for in illustrators and manuscripts. Designers taught her programs like Photoshop and urged her to give illustration a try, but it wasn’t until 2008 when she spotted a Disney friend’s picture book in a shop window that she bit the bullet, enrolled in a short course in children’s book illustration and began showing her work to publishers in Australia, the US and UK. Her first commission came quickly and was followed by Lulu Bell andthe Misty Inn series for Simon & Schuster US. “Just one ‘yes’, that’s all you need,” says Serena. “It starts the ball rolling.”

Serena returned to Melbourne three years ago for an inspiring change of scene. Shared studios proved fun but she finds a home office more productive, especially when deadlines loom. Essential equipment includes her Wacom Cintiq for digital work and her trusty pencils, markers, watercolours and gouache for the messy, tactile, hands-on stuff she regularly craves. After six years illustrating picture books and junior novels Serena has learned to walk away from illustrations she’s labouring over, returning with fresh eyes. “I often say to students ‘don’t be so quick to erase something’ because some of my most atrocious things or accidents I’ve been able to manipulate into being some of my best work.”